Here’s proof that AR-15s are weapons of war 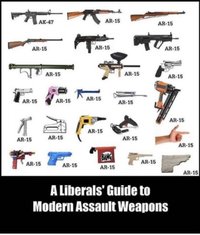 No military, to my knowledge, ever equipped their troops with AR15s. Mercs used them on an individual basis during the Rhodesian bush war, but they were not members of the Rhodesian military. Most of these mercs were contracted to provide ranch security. The standard Rhodesian military rifle was the 7.62 NATO FN/FAL. The AR15 was designed for, and marketed to, civilians.

ScottS said:
"They are designed to inflict as much harm and death as humanly possible"

"They're designed to kill as many people as quickly possible."

I hear this all the time. My question is always "Why do police departments issue them? Do they want to kill as many people as quickly as possible?"
Click to expand...

I could not watch the entire clip but felt the need to look up the bio of the congressman in the report and of course he was a JAG.

BOOTKNIFEFAN said:
No military, to my knowledge, ever equipped their troops with AR15s. Mercs used them on an individual basis during the Rhodesian bush war, but they were not members of the Rhodesian military. Most of these mercs were contracted to provide ranch security. The standard Rhodesian military rifle was the 7.62 NATO FN/FAL. The AR15 was designed for, and marketed to, civilians.
Click to expand...

I know. That's why my first question is always "If AR15's are weapons of war, how come no militaries use them?"
H

A pump shotgun is also a weapon of war. And that is what is next on the ban list. ScottS said:
I know. That's why my first question is always "If AR15's are weapons of war, how come no militaries use them?"
Click to expand...

No military forces ever used the American 180 SMG and the Armalite AR18 either. They were used by the Irish Republican Army and other terrorist groups.

So this expert went to war to kill with an Aero upper and prehealy lower?
H

ScottS said:
"They are designed to inflict as much harm and death as humanly possible"

"They're designed to kill as many people as quickly possible."

I hear this all the time. My question is always "Why do police departments issue them? Do they want to kill as many people as quickly as possible?"
Click to expand...

Police departments don't issue them. They issue "patrol rifles". Friendly and safe, don't hurt nobody. That is exactly what the news report
on the radio said today about the guy who stole a police cruiser and the rifle in it. He found the "patrol rifle" in the car. Nothing killy or black.

I tried having this discussion with a friend who asked why anyone needs an "assault rifle".

I asked her what an assault rifle is.

You know how it went from there.

KBCraig said:
I tried having this discussion with a friend who asked why anyone needs an "assault rifle".

I asked her what an assault rifle is.

You know how it went from there.
Click to expand...

Exact same thing with my SIL. I basically wrote an essay in reply to her, rebutting every point the media makes. Didn't hear anything back from her. Surprise, surprise.

Yes. Believe the person behind the weapon. When the M16, not the AR15, was introduced into service in Vietnam, the barrels rate of twist was incorrect. As a result, the projectile did not spiral as expected. Rather, it tumbled, end over end, creating a skill saw, type of effect on impact. As you would imagine, this was a very inaccurate bullit, that while innacurate, for obvious reasons, could cause the projectile, to remove a arm, in some cases, due to its incorrect method of travlel, which again, was end over end. The rate of twist was corrected at some point, but who knows, how long, those first M16's stayed in use, in the field. Although this problem was corrected, decades ago and only affected military M16's, in the very early days of production and never affected a single AR15, the myth exhists now, that the AR, which never shot ammunition in this incorrect, manner, takes off arms with one shot. While great fuel for the dem fire, its pure bullshit. It simply is not true.

Dennis in MA said:
I remember I was in collitch when they "banned" African American Talons. Watching Dateline NBC or something talk about it. Some doctor talking about how it bounces around inside of you slicing you to ribbons. A bad graphic of an expanded hollow point bouncing around inside an illustrated torso.

I was deeply concerned about them back then. I WAS the ignert-voter-guy. I can totally see how this sucks people in. Most people don't have the bandwidth to track anything beyond the drive home from work and trying to put food on the table.
Click to expand...

Noreaster said:
OMG, you need to hold back the puke and try to make it further into the vid.

The ar-15 takes heads and arms completely off.

I just watched a video about one of our engagements. The bad guy was hit with 3 3-5 shot strings before a final headshot took the guy down for good. So up to 15 hits and it still took a headshot to finally take the guy down. I didn't get an actual hit count, but it was a pretty open engagement with no cover. It was a close engagement during an interdiction. From what I could gather, it was maybe 30-40 yards, that's just my interpretation based on my experience. Bad guy being able to see the agent at night without NVG's and starting the engagement. Normally, things get pretty personal at night before people realize I'm there.

I've been reading that the military people with real experience want a heavier round than the 556 for actual combat. I asked my guys about moving to 300 AAC or 6.8 when I had the chance. I was told both would be better overall, but simply logistically and financially it didn't make sense. We do use soft points, which is a little different than the .mil guys. Generally bad guys aren't wearing armor either.

Isnt the chief of Police of Boston on record (when asked about whether or not the police should give up their "weapons of war") stating that the police dont have weapons of war because the rifles his cops carry were designed for civilians?
B

Jsfitzgerald85 said:
Isnt the chief of Police of Boston on record (when asked about whether or not the police should give up their "weapons of war") stating that the police dont have weapons of war because the rifles his cops carry were designed for civilians?
Click to expand...

Some were, some weren't. Massachusetts police departments, including some campus police, received M14 and M16A1 rifles from the Army as part of a give-away program. Police in other states also received them. These are real machine guns, since they are capable of full-auto fire. Since they were Army property and never NFA registered, big no-no for civilian possession. Only LE and military can possess them.

Cant say it any better than this.

VetteGirlMA said:
Hey a lot of us were stupid ignorant voters once upon a time. I was a college kid and didn't think much about anything because I was too busy working on getting through 4 years of school. I would have gleefully signed up to any gun ban *because* I was stupid and ignorant at the time. I honestly never heard of the Hughes amendment for example until I became a gun owner.
Click to expand...

Glad u saw the light!

The whole entire media establishment is a "weapon of war".

FisherTech said:
First you have a mouth piece from the Communist Media and then a Congressman who is a member of the Communist Party stroking himself as having been in the military, There is where I will say with out a doubt was his first and only indoctrination to firearms.
Click to expand...

Through my 25 years on the military I've unfortunately met tons of service members that believe that their military training was necessary to "handle" an m16 or m4 and that only the military and police should be able to own them. Your last statement is dead on......none of these people had owned fire arms prior to joining the military......and the vast majority of them......were not even in combat arms.......the ones with this bullshit opinion were generally support MOS holders. Which I suspect the knucklehead on this video was also.

When I was a CPT I ended up in an "off duty" debate at the local watering hole with a COL that felt this way....."only folks trained like us should have an AR". He was a career medical services officer (a logistics MOS). Where you fire an m16 once a year for qualification and that's it. I had to choke down my desire to bitch slap him right there. Instead I told him I know many many pure civilians that fire more 5.56 in a week than you do in a year.
Last edited: Mar 27, 2021
U

What the leftist MSNBC, ABC, NBC, CNN, NPR, PBS, et al refuse to confess is that having control of a nationwide propaganda system that feeds a gullible public complete bullshit lies 24/7/365 is one of the most prolifically used "weapons" in any war in any country. That's why a broadcast system is one of the highest priority targets in the initial stages of a war. They are either seized by the opposition or bombed off the air in the opening days.

There's reason why AWACS planes are in the air in any war zone we're involed in, jamming and target acquisition along with commo repeaters, radar, etc.
Last edited: Mar 27, 2021
S

mikeyp said:
Steaming pile of MSNBC garbage but we need to be aware of the shit they spread

Maybe that reporter should ask for a brief assignment in Myanmar. I hear the reporters are treated great over there... 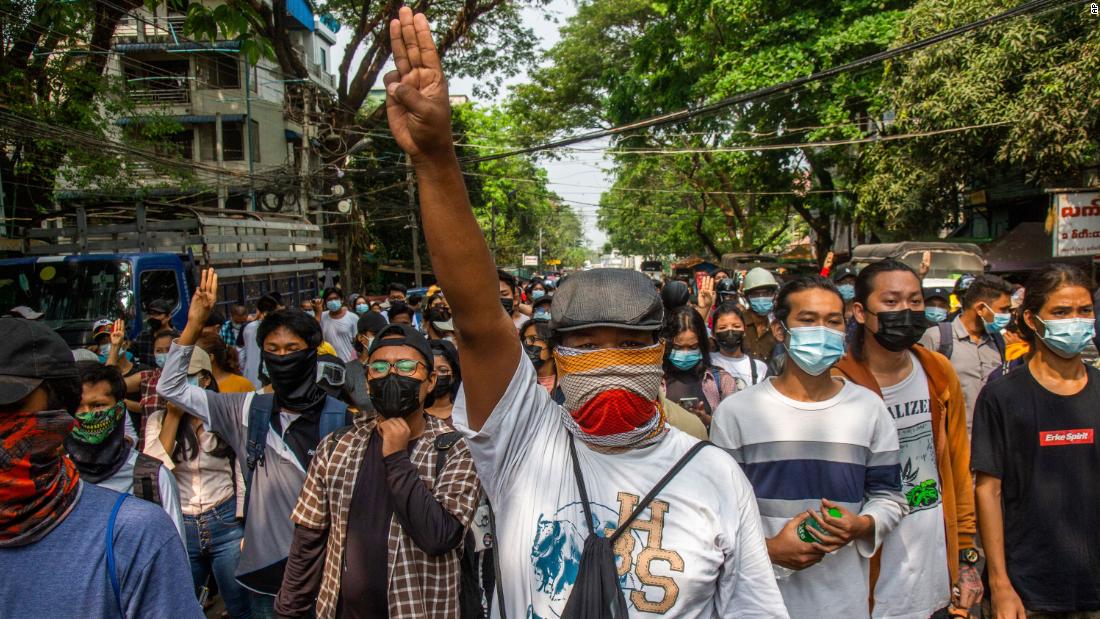 The killing of at least 114 civilians Saturday in Myanmar, according to a tally by the independent Myanmar Now news outlet, has led to calls for the international community to take action against the Myanmar military junta.

YANGON/BANGKOK -- As Myanmar's military junta seeks to crush the country's media -- through crackdowns on independent publications, arrests and restrictions on reporting -- concerns are rising about the long-term future of press freedom and safety of journalists in the country.

Since its Feb. 1 coup, the military regime led by Gen. Min Aung Hlaing has arrested at least 46 journalists, according to the Assistance Association for Political Prisoners (AAPP), which monitors arrests. At least 23 remain in jail on charges related to sedition or violating public order.... 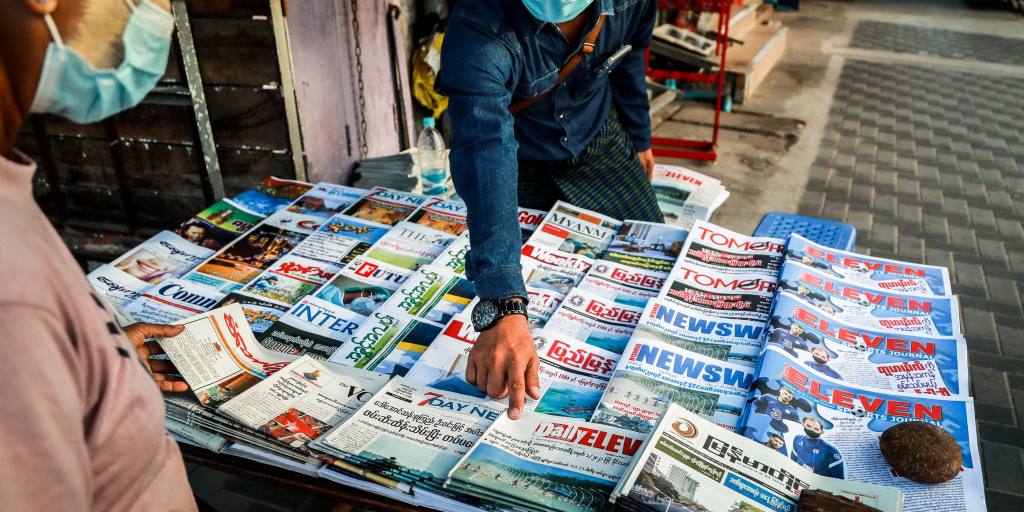 Myanmar junta crushes journalists, but news still gets out

So the police are at war with the American people.
I mean they are carrying weapons of war...

What did the American people do so bad that the police carry such weapons against them?
Do they plan on using such deadly weapons designed to kill people as quickly as possible to exterminate our own people?

TL;DR, but someone probably already said it;
They don't become weapons of war until they try to take them away.

When face to face with a terrorist, one Army Ranger attacked with the only weapon he could reach--an MRE spoon.
military.id.me

Government Admits AR-15s Are Not Weapons of War

M
Assualt Weapons that are legal?

Tavor X95: Weapons that are not copies or duplicates of Assault Weapons