Headgear for the Jewish Shooter, and those who support Israel

Greetings and Happy Hanukkah to all Jewish Shooters . . . . .

A buddy of mine in Amherst, NH has for sale a small batch of Gadsden Kippot. He's selling them for "chai" dollars each -- for the non-Jews reading this, that's $18, including all shipping & handling. Proceeds from the sale go directly to a pro-Israel charity.

For those interested in owning their very own Gadsden Kippah, go to the following link and reach out to David. He's a 100% stand-up kind of guy and a staunch supporter of all things 2A.
https://davidhuntpe.wordpress.com/2015/11/13/jewish-and-in-the-tea-party/

And in the spirit of full and fair disclosure, even though I posted this information, I will not benefit financially in any way from any sales. In fact, I even purchased a Kippah from David. I can't wait for it to arrive so I can wear it to synagogue.

Proceeds go to what "pro-Israel charity?" Or, do they just go to a plane ticket?

what's the difference between a kippah and a yarmulke?

jhblaze1 said:
what's the difference between a kippah and a yarmulke?
Click to expand...

question why does the caricaturized bible belt Jesus Lovin NRA don't take my Guns Christian right support Israel if some of the most prominent anti-gun politicians here in the US are Jewish?

Love it! Going to pick up a couple for some shooting buddies of mine.

Your list of Jews isn't complete. Hitler wouldn't approve such a sloppy work.

i can't state a fact without becoming a nazi?

Lcstyle said:
question why does the caricaturized bible belt Jesus Lovin NRA don't take my Guns Christian right support Israel if some of the most prominent anti-gun politicians here in the US are Jewish?
Click to expand...

because they want to be sure the pieces are in place for the end times and Jesus' return to take them all home. Can't have their blessed apocalypse without Jerusalem and all the Jews, so they want to make sure their fantasy of being taken up to heaven while the non-christians are left behind.

Sheesh, I think the OP was just trying to let some shooting buddies know of an item of interest to them.....

Lcstyle said:
question why does the caricaturized bible belt Jesus Lovin NRA don't take my Guns Christian right support Israel if some of the most prominent anti-gun politicians here in the US are Jewish?

Because they are Progressive Liberal cultural Marxists that happen to be secular Jews... most gun grabbers pray to Marx.

You aren't trying to imply that's an anti Semitic statement? Are you??

If you want to read about why so many jews who are fond of saying "never again" want to disarm the populace, go to JFPrg.

Its crazy really. I'm astonished at how many of my liberal jewish friends have completely forgotten that much of the evil that has been done to jews throughout history has been done not by thieves or criminals, but by GOVERNMENT. .

dcmdon said:
You aren't trying to imply that's an anti Semitic statement? Are you??
Click to expand...

Maybe I'm a little too sensitive to the lists of Jews. Too many members of my and my wife's families were on these lists 70 something years ago. The fate of some of them is still unknown.

I live the next town over from where David lives. Is it possible to pick up a yarmulke in person to save the shipping costs?

I'm not getting the fact why somebody has to bring up the fact that many Jews in America are liberal and anti-gun. So what? Historically urban, same could be said for other ethnic and religious groups. Simple fact more people are not Jewish who are anti-2A.

What we have here is a guy who wants to combine his religious pride with his love of the 2A and all of a sudden people crawl out of the woodwork and want to make more out of it than it really is and bash fundamentalist Christians and paint Jews in a less than favorable light then go and say: "you callin' me anti/Semitic ?"

Look if ya don't wanna buy the yarmulke don't buy it. Don't turn this into some kind of grand political statement about Jewish charities and why you hate Israel.

We have an enemy out there that hates all of us, Jews and Christians alike and perhaps we need to focus more of our energy on trying to figure out to fight these people than worry about some guy who wants to sell some religious hats.

Two of the finest men I know in real time on NES are Jewish and you won't find anymore staunch defenders of the 2A than them.

I know guys that have grandparents with forearm tattoos.
G

Unlike Obama, I consider Israel as our 58th state.

As a Jew who lost family to the Nazis, I will never give up my ability to defend myself and my loved ones and I will never get into a train car. Proud JPFO member right here.

We need a Jewish NES shoot 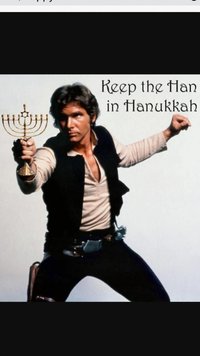 The Sinister Difference Between "ISIS" and "ISIL"

Here is an explanation of the difference between the terms ISIS and ISIL. I have been suspicious of the term ISIL to which the administration stubbornly clings.

ISIS = Islamic State of Iraq and Syria. Iraq is to the east of Jordan (shaped like the hatchet) and Syria is to the north.

ISIL = Islamic State of Iraq and the Levant.
Iraq is still to the east of Jordan, and “the Levant” is a term that comes from “the rising (of the sun, i.e., to the east)” - and is basically the land along the Mediterranean - that includes Lebanon, Israel, and those countries along there.

By saying ISIL, you “negate” Israel as its own country and lump it in with the rest of the countries along the Mediterranean - and Israel sort of disappears
(loses its sovereignty) and becomes part of “the Levant ” - which is therefore part of ISIL.

If you've wondered, as I have, why all government agencies and especially B.H.O. calls it ISIL -- and even spells it out every time it's used -- instead of ISIS as the rest of the world here's the answer.


Decoding Obama’s speech reveals some startling revelations. In one press conference after another, when referring to the Muslim terror super-group ISIS, United States President Barack Obama will use the term ISIL, instead of their former name ISIS, or current name Islamic State. Have you ever wondered about that? Here is the difference: What makes up the near exact center of the Muslim Levant ? Israel.
Now, to us Westerners we don't really make much of a distinction, do we?
No, honestly from our perspective it’s all about the same. But how would a Muslim living in the Middle East view it? Just what is the Levant anyway? Let’s take a look. The geographical term LEVANT refers to a multi-nation region in the Middle East. It’s a land bridge between Turkey to the north and Egypt to the south.

If you look on a map, however, in the near exact middle of the nations that comprise the Levant, guess what you see? Come on, guess!

****When Barack Obama refers over and over to the Islamic State as ISIL, he is sending a message to Muslims all over the Middle East, that he personally does not recognize Israel as a sovereign nation, but as territory belonging to the Islamic State.

Now you know why Obama says that he has no plan, no goal, and no stated aim for dealing with ISIS.

But he does have a plan, and it’s a really nasty, diabolical one.

Obama’s plan is to drag his feet for as long as he can, doing only the bare minimum that Congress forces him to do. His plan to buy ISIL as much time as possible to make as many gains as they can. Listen as Obama and his press secretary and the spokesperson for the State Department and his Joint Chiefs of Staff painstakingly spells out the letters I-S-I-L so there is no doubt in your mind. And it’s working. The Islamic State has garnered millions of dollars, a vast cache of weapons, and in their latest foray have captured Syrian fighter jets and now 12 commercial passenger planes. With each passing day that Obama fulfills his stated aim of doing nothing, the Islamic State grows by leaps and bounds. The ultimate goal, of course, has not changed and will never change.


The ultimate goal is the destruction of Israel.

Now you know a little bit more about why Obama chooses his words so carefully.

kalash said:
As a Jew who lost family to the Nazis, I will never give up my ability to defend myself and my loved ones and I will never get into a train car. Proud JPFO member right here.

We need a Jewish NES shoot

My family got out in time, or at least the ones I'm directly related to. The rest are STILL my family.

Before my current signature line (culled from an editorial on JPFO called "Why Jews hate guns") it said "I won't get on a train, it didn't work out for my people so well last time."

Stape said:
Sheesh, I think the OP was just trying to let some shooting buddies know of an item of interest to them.....
Click to expand...

OP here . . . . that is exactly correct. Nothing more, nothing less. I'm in Chicago right now, and I can't wait to wear my Gadsden Kippah and watch as the heads of all the liberal/progressive mid-west "socialists" heads explode.

Location
Behind the Iron Curtain - PRM

Stape said:
Sheesh, I think the OP was just trying to let some shooting buddies know of an item of interest to them.....
Click to expand...

Lcstyle said:
question why does the caricaturized bible belt Jesus Lovin NRA don't take my Guns Christian right support Israel if some of the most prominent anti-gun politicians here in the US are Jewish?

Israel is a NATION and the people you listed aren't citizens of it, they're USA citizens.
Judaism is a RELIGION, not a nationality.

The never-ending variety of shit I learn here is amazing.

As long as you would welcome non Jewish supporters, I would attend.

I am so pro Israel, that my 24 year old daughter keeps telling me she is waiting for me to convert.

Jews have done more for the betterment of the human race than any other group, look at a list of Nobel prize winners. And Jews consistently top the list most intelligent group on the planet ( sorry Asians, you are a close second). I am a big stupid Irishman and we barely make the top 10, which I think is unfair. We should get extra credit for Guinness.
You must log in or register to reply here.
Share:
Twitter Reddit Link
Top Bottom