I'm just chiming in because I always want Navy to win, and NEVER want Air Force to win.

Scapegraces! Low born and unworthy of participating in polite society.

"Fly you Falcons down the field, tear the enemy asunder."

It's fine. I'm equal-opportunity. I like Army even less than Air Force.

I worked with WAY too many West Pointers to want anything good for that school. By contrast, all the Annapolis men I've known were first-rate guys. Air Force?

They're just an afterthought. Lol. But I went to college out in the Rockies, and other than BYU, no school is more universally hated out there than USAFA.

Picton said:
They're just an afterthought. Lol. But I went to college out in the Rockies, and other than BYU, no school is more universally hated out there than USAFA.
Click to expand...

That's usually because we took all their good-looking wimmin.

The field at Navy-Marine Corps Memorial Stadium was awash with American flags on Saturday as every player on Navy and Air Force sprinted out of the tunnel carrying the red, white and blue. Two Navy players carried the Marine Corps flag and the Navy flag. Halftime featured 135 midshipmen carrying a 65-by-120-foot flag surrounded by spinning red, white and blue stars as “America the Beautiful” was performed by the Navy and Air Force Drum & Bugle Corps. Outside of the venue, an artist drew the flag in the middle of a 9/11 memorial depiction.

The 54th meeting between Navy and Air Force was more than just a typical game between rivals as Saturday was the 20th anniversary of the 9/11 attacks. Throughout the game, moments were taken to commemorate the deadliest attack on U.S. soil and to remember the 14 Naval Academy graduates and two Air Force graduates who lost their lives. The stands and grassy hill behind the north end zone were filled with an announced 36,997 people, the 10th-largest crowd in stadium history.
The football product was not as elaborate as both teams were offensively challenged in a 23-3 Air Force victory that gave the Falcons back-to-back wins against Navy for the first time since 2010 and 2011. The three points match the fewest Navy has scored in the series against Air Force.
Click to expand...

Let's wait for the big one! 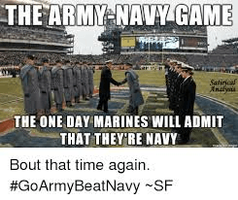 I didn't look for this thread because every year I mention the Commander in Chief's Trophy it flops.

USAFA for the win.

any Air Force folks stationed nearby?