Honestly, my brother bought it for me in El Salvador and flew it up for me, carry-on, pre-9/11. It lasted over twenty years of hard use. I use a Gerber Gator now, and I think it cost about $25.

El Salvador has some very durable machete makers. The ESEE Expat Darien is one of those (CONDOR). Such balance keeps your swinging arm fresh!
Last edited: Jun 25, 2020

enbloc said:
El Salvador has some very durable machete makers. The ESEE Expat Darien is one of those. Such balance keeps your swinging arm fresh!
Click to expand...

He said it was one of those street markets you see on Google Images when you search for terms like "third-world shithole." Machetes of every size and shape in huge piles, right next to the guy selling bat meat; that kind of thing.

The Darien, latest model in ESEE’s Expat line series, will be releasing soon. Configured for machete chores but lighter than the average chopper, the Darien fits into the globetrotting ethos established by the Expat releases that preceded it.

Given its machete heritage, the Darien is a big boy, with a blade length of 12.38 inches. The blade shape hews close to classic machete tropes, with a long stretch of straight edge that turns upward to meet a significantly dropped tip. This bit of geometry gives the Darien’s blade an almost spey-like profile. At .094 inches thick, the blade stock is beefy enough to be tough but not so thick as to add unnecessary weight. Chopping and other outdoor chores are well within the Darien’s wheelhouse, and because it isn’t unnecessarily overbuilt, it does remain capable of tasks that require a bit more dexterousness as well.

The Darien is made by an ESEE partner in El Salvador. The Expat series knives have varied in the steel they use; for the Darien, ESEE chose the very practical 1075 carbon steel option, sporting a convex grind. This steel/grind combination gives the Darien the combination of toughness, edge retention, and ease of maintenance requisite in a chopper.

Fixed blade ergonomics tend to be less flashy than what we see on folding knives, and ESEE almost always keeps things dead simple in this department; so it should be no surprise that the Darien has a plainspoken, subtle handle. Completely devoid of finger grooves or a finger guard, it curves gently downward from the bottom of the blade to the butt end of the knife, where a lanyard hole has been added. The Darien comes with rough and ready canvas Micarta handle scales and a canvas sheath. ESEE lists the Darien’s weight as 15.5 oz. – just two ounces heavier than the Libertariat machete, even though it has more than 3 inches on that knife in terms of blade length.

This is the fourth release in the Expat series, and the first since the limited edition Medellin folder in 2018. The series is named after a member of the ESEE forum who started working with the company on bringing his designs to life. Although the Expat releases have all been made from carbon steel so far, Expat himself has teased an S35VN project of some sort on the forums.

Picton I'm not going to El Salvador to buy an $8 machete, I've already lost my head...

My Fallkniven showing it’s laminate blade. This knife is smooth as glass opening. I got rid of the lanyard ring. It feels indestructible. 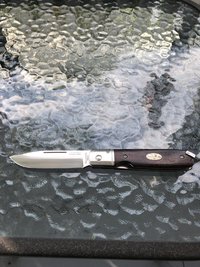 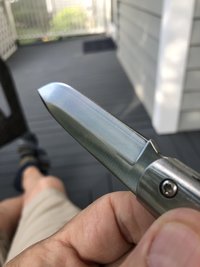 Also, Slip-joint? Or, some type of lock? The notch in the top pix looks like it may hide a liner lock... or just the liner...

This thing is all I need for a self defense. Who needs a button when you can just flick your wrist to open. Typical liner lock and the steel says lam CoS, so I’m not quite sure. Probably hi chrome. Pivot feels like a bearing. I think the scales are Cocobola. 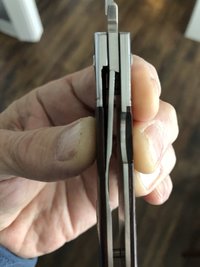 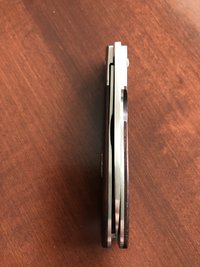 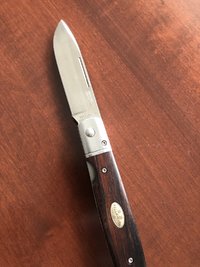 Wow. That liner lock is about 60% as thick as the blade... Very Strong. No spine-whack tests though... right?