APOCALYPSE SOON
Snowflake Alert: COVID-19? You ain't seen nothing yet!
Our forefathers were a hearty breed, able to cope with difficult times and conditions. Mariners of the day endured voyages lasting several years, living aboard ships lacking much sanitation, food consisting of weevil-infested rock-hard dried bread and salt pork, diseases like scurvy running rampant, harsh discipline and dwindling crew numbers as death took its toll. These sailors proved tough as nails – their persona perhaps best captured in the opening lines of the poem, "Clipper Ships and Captains":

There was a time before our time,
It will not come again.
When the best ships still were wooden ships,
But the men were iron men.

Despite life throwing numerous challenges, these early generations courageously met them. They represented a far cry from today's "snowflake" generation intimidated by a mere statue or word perceived as non-politically correct, causing them to feel "unsafe." What a difference in character a century or two can make.

But that same old fighting spirit of yesteryear will need to be drawn upon again if we, or a future generation, are to survive another anticipated global crisis. This one has been predicted to be riding a 100-year cycle in striking planet Earth. And, the bad news is we just quietly passed the 99th anniversary of its last strike.

For those unable to muster the fortitude to deal with the COVID-19 crisis, hard-pressed to return to whatever normalcy can be achieved, we are in store for something far worse. It is something from which only those possessing the iron man mentality of our forefathers will survive.

Before addressing this yet-to-come cyclical crisis that may well come while we are still fighting COVID-19, let us examine our history in dealing with multiple crises simultaneously.

Two previous times in our history, America was subjected to a serious epidemic while also fighting a war. Thus, these epidemics struck at times the nation could ill afford stay-at-home lockdowns.

Snowflake Alert: COVID-19? You ain't seen nothing yet!

why the hell do you THINK they lined the hull of Old Ironsides with copper????

I mean, we missed "the big one" just a few years ago. A CME on par with the 1859 Carrington event shot through space where the earth was... a week after we passed through. This was back in 2012.

The article isn't really accurate... In 1989, we got hit by a CME and it took down a chunk of Canada's power grid, and nearly took down the North East's power grid.

In May of 1967 we where hit by the 8th strongest CME driven solar storm since magnetic records began.

By all accounts, the 1921 storm was strong, but not nearly the "big one", and its certainly not the 99th anniversary of a CME's last strike.

If your interested in CMEs, and that 2012 CME (which scientists have been using as the new base model for strong solar storms) This article has some good info, including some quotes from a study done by Nasa scientists working with some universities on the likelihood of a Strong CME hitting earth in the next 10 years. (if you are too lazy to read it, it was done in 2014, and it was 12%.... Shockingly High. ) Link

Fun Fact, We are probably going to get hit by a CME tomorrow.. No Really, Nasa detected a CME, and predicted it could hit Earth Tomorrow (July 24th) But it wont be very strong. Space Weather

THE END is near, donate all your guns to me!

CME along with debris from the comet's tail. Could be "Night of the Comet".

Make sure you sleep in a solid metal building. 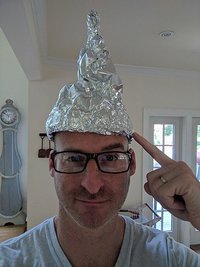 WND??? Yeah. 1921 didn't have a ton of transistors that would be majorly affected by a EMP. Shockingly, they had to change some fuses and they got some good radio reception and some northern lights. We'd be in a worse situation now, but there isn't a ton we can do as people about it, short of making a faraday cage for your phone 24/7.

Chris said:
CME along with debris from the comet's tail. Could be "Night of the Comet".

Make sure you sleep in a solid metal building.
Click to expand...

Sorry, that is not an effective faraday cage, You need to totally encase your brain in the foil for it to be effective.

Come on CME, come on.