Everytown for Gun Safety, the gun prohibition lobbying group backed by anti-gun billionaire Michael Bloomberg, has launched a new email blast urging recipients to call their U.S. senators and demand that they support S. 2275, also known as the “Break the Cycle of Violence Act.”

It looks to be a $5 billion boondoggle effort to “invest” in “gun violence intervention” programs in communities that are “most impacted by the gun violence crisis.”

The legislation was introduced in June by anti-gun New Jersey Senator Cory Booker, a Democrat who ran for president in 2020 but dropped out of the primary race.
Click to expand...


“As your constituent, I urge you to co-sponsor and work to advance the Break the Cycle of Violence Act, S.2275. The passage of this bill would be a historic step forward in addressing community gun violence, a public health crisis that disproportionately impacts Black communities in the U.S. The Act would also be a first of its kind: a targeted investment of billions of dollars over eight years in the communities most impacted.

“The community-based violence intervention strategies supported by the Break the Cycle of Violence Act are informed by public health models and provide culturally competent, trauma-responsive services to individuals and communities impacted by gun violence. These programs have been proven to reduce gun violence, shift community norms, and improve the outcomes and resiliency of gun violence survivors.

“These comprehensive investments in the implementation and sustainability of community-based violence intervention programs are critical to reducing gun violence and building resilience and opportunity. I urge you to co-sponsor and work to advance S.2275 and support this life-saving bill.”
Click to expand...

The bill is here

Use the 5 Billion to pay off violent gun criminals in the city.

I wonder if known gangmember + possession of a gun = 20 years in prison would have any effect?

Sniper (+) said:
I wonder if known gangmember + possession of a gun = 20 years in prison would have any effect?
Click to expand...

I doubt it, this law was passed when I was 10 and it doesn't seem to be used much.

Better to provide all the YBMs in Chicago with eye and ear protection. While they are fumbling to put the stuff on, the intended targets might be able to get out of range. That would make about as much sense (none) as all their other stupid ideas. Jack.

it's pork wrapped around "gun violence"

meaning 85% has to go to private entities

GaryO said:
I doubt it, this law was passed when I was 10 and it doesn't seem to be used much.

Much? Has it ever actually been used?

mikeyp said:
Much? Has it ever actually been used?
Click to expand...

Just like the Dukakis prison furlough program, every one thought Willie Horton was the big problem but prisoners were skipping out and murdering people from the beginning.

this should say it all==(B) does not include acts of violence motivated by political beliefs.

I’ve reviewed manuscripts submitted for publication in medical journals on such Violence Intervention programs. They all seem like something that could work - councilors and aid starts after ER admission of shooting victims, many of whom have gang relationships or hard lives in the hood. As most gun shot injuries are survived (see HeyJackass for Chicago statistics) finding out how to help people out of gangs and the hood seems like a good approach.

But look at those numbers - 2860 non-lethal shootings in 9mo is on track for ~4k per year. What kind of effort would it take to “lift” even 10% of those people out of the hood and/or gangsta life? With lifetime median earnings of $900k-1.7 million, depending on education level, that $5 billion could literally buy those 4000 people a new life. But most of the money will be squandered with few helped. The US spends a combined $1.1 trillion on a multitude of programs and payments annually - which has gotten us where we are today. That $5 billion brings that total up to $1.105 trillion - chump change.

When I review the manuscripts, I say encouraging words and accept with revisions, to include a review of the efficacy of such programs, knowing the data are all but absent. One author has submitted such papers over 10 years and still cannot point to any studies/data suggesting $$$-millions spent works better than prayer. Peer-councilors bounce back and forth from prison and government-paid counseling jobs, counseling those who bounce back and forth between the ER and prison until they find a grave. Spending more $$$-billions? Throwing more money down a rathole only makes rats richer.

This study demonstrates that VIAP is effectively engaging the client population that HVIPs have been designed to support. HVIPs should consider novel strategies to engage vulnerable populations not typically targeted by intervention programs. These results speak to the difficulties of program...

So, about 1/3 were engaged by VIAP (mostly young Blacks - probably males - with mental problems), but only wrt to basic needs rather than education, jobs and housing. They got patched up, some rehab, cash and food vouchers, and then cut loose. About 2/3 did not engage at all. That’s failure. Dismal failure. 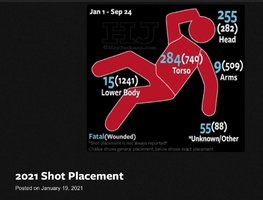