Rhetorical question, I know what they want

Firearm Discussion and Resources from AR-15, AK-47, Handguns and more! Buy, Sell, and Trade your Firearms and Gear.


go ahead, tell me TX is amazing. They invited all the liberals to move there. This is what you get.


I expect a bunch of tranny rights bills to be dropped on us soon also.

go ahead, tell me TX is amazing. They invited all the liberals to move there. This is what you get.
Click to expand...

Dr_Scholl said:
They're not going to have the votes, no matter what happens in Georgia.

This is just more fearmongering bs.
Click to expand...

Is this your final answer?

With Georgia fallen and the Senate in Democrats’ hands, there will be a lot more First 100 Days gun control. That said, Biden will be under pressure to not risk all of the Blue Dog politicians up for 2022 re-election.

Our best hope is that he grows even more mentally feeble and the Progressive Socialist Left try to 25th Amendment him - the Democratic Party would self-destruction with Conservative Left jumps to the GOP.
D

falcon123 said:
Is this your final answer?
Click to expand...

The filibuster and Joe Manchin.

Counting on Joe Manchin is like trusting a rattlesnake not to bite you.

falcon123 said:
Counting on Joe Manchin is like trusting a rattlesnake not to bite you.
Click to expand...

Recently, Howie has taken to referring to Manchin as
"one of those guys who's always there when you don't need him".

falcon123 said:
Counting on Joe Manchin is like trusting a rattlesnake not to bite you.
Click to expand...

Manchin was also asked about a ban on sort forms of semiautomatic weapons.

“There has to be responsibility in gun ownership. I’m not going to eliminate people having their gun,” Manchin responded. “They shouldn’t be scared to death of Democrats on their Second Amendment, taking their guns away. … So no, we’re not going to take people’s guns away, but there is things that we should not have in people’s hands.”
Click to expand...

So basically you can own a gun, as long as its a single shot 28ga

Stop thinking the filibuster exists - the plan is to get rid of it on everything. Remember the GOP never played around with it, they just kept the rules the DEMs had put in with regard to filibusters on judges. Schumer will change the senate rules.

Manchin may be a wild card (probably not) but Collins, Murkowsky and Romney are still there.

Here’s the 2ndA firearm Dems are willing to let you own, properly disassembled for safe storage and locked separate from ammunition, of course.

I despise the repugnant Democrats, but the GOP is not far behind.

AHM said:
I've been saying that they're going to start warming up the Dog Track Shuttle Bus
the morning after Tapioca Joe delivers the most senile State of the Union evvah.
Click to expand...

Overnight I realized a specific tactic they could use to get rid of Biden*:

He's obviously on carefully calibrated maintenance doses of
at least drugs to hold strokes at bay; and probably anti-senility meds, too.

They should have a licensed nurse dispensing his meds,
but I bet they have some staffer doing it to keep the truth
to as small a circle as possible.

Just feed him sugar pills instead of coumadin and aricept
in the run-up to the State of the Union.

Even if he doesn't stroke out on camera,
he'll still turn in the babbling performance of his lifetime.

He'll be such a mess that Nancy Pelosi will tear up the speech again,
because he will have drooled all over it. 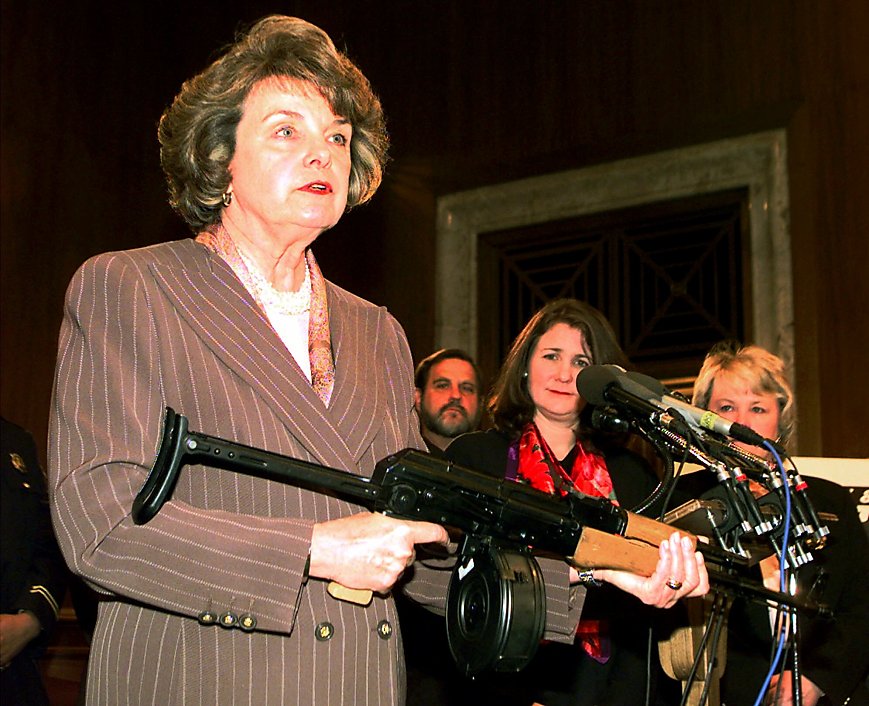 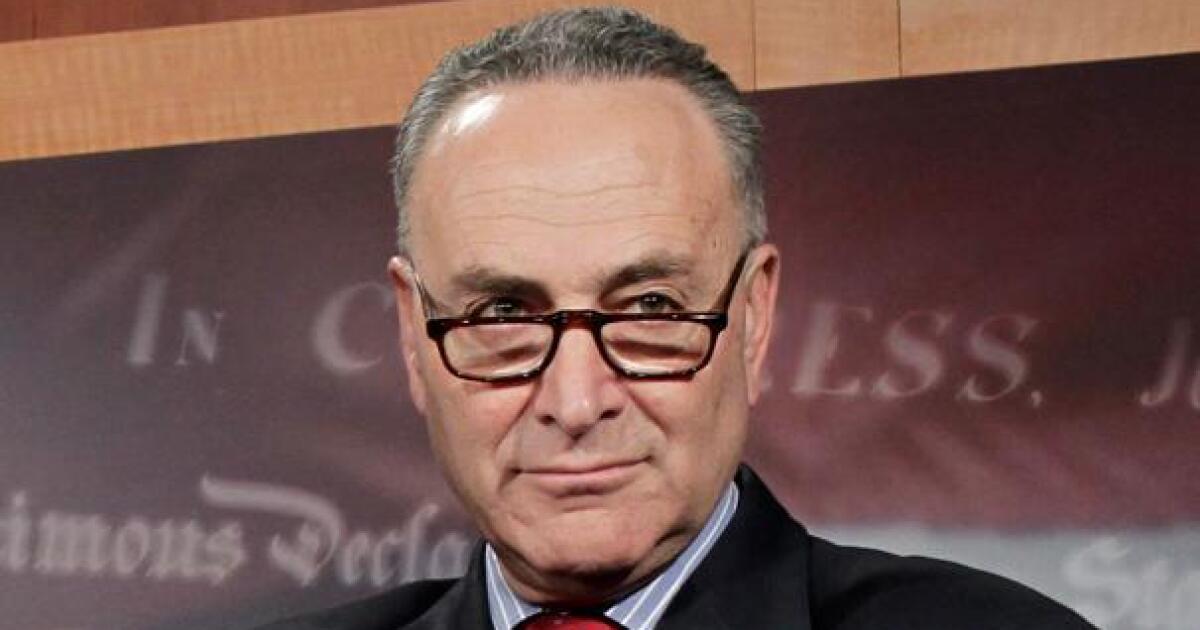 As early voting has already begun in the Georgia runoff election, with control of the U.S. Senate on the line, there is no shortage of opinions about what the nation’s greatest deliberative body will look like if it comes under the control of Democrats, led by Sen. Chuck Schumer.


As early voting has already begun in the Georgia runoff election, with control of the U.S. Senate on the line, there is no shortage of opinions about what the nation’s greatest deliberative body will look like if it comes under the control of Democrats, led by Sen. Chuck Schumer.


People, for example, can be sure that a Democrat majority partnered with a Biden presidency will clear a path for gun control — gun bans, a ban on private firearm transfers, magazine capacity limits, and potentially even a firearm confiscation initiative.


While it is no secret that Schumer and his colleagues on the Left have been avid proponents of gun control, the New Yorker’s recent story about Sen. Dianne Feinstein’s declining health also conveniently exposed the degree to which the gun control lobby has already embedded itself among Senate Democrats.


In the story, reporter Jane Mayer’s anonymous sources recall that Minority Leader Schumer was concerned enough about Feinstein’s mental acuity and her ability to manage Justice Amy Coney Barrett’s confirmation hearing that he “embedded” a trusted staffer into the Senate Judiciary Committee to “make sure the hearings didn’t go off the rails.” The staffer he chose for this task was Max Young, unsurprisingly a former Schumer staffer, but shockingly the current chief public affairs officer for gun control groups Everytown for Gun Safety and Moms Demand Action.


Cam Edwards of Bearing Arms put it perfectly when he urged people to see the situation in reverse. “Just imagine for a second the amount of outrage that would come from the Left if the New Yorker reported that Mitch McConnell had brought in the chief of public affairs for the NRA to ‘embed’ in the Senate Judiciary Committee,” Edwards commented when the story broke earlier this month.


The comparison is apt. After all, the media is often caught foaming at the mouth to report on the various ways Second Amendment advocates such as the National Rifle Association and the National Shooting Sports Foundation protect the right to keep and bear arms in the courts and in federal, state, and local governments. By contrast, Moms Demand Action and Everytown for Gun Safety’s support of extreme measures such as gun confiscation and firearm magazine capacity limits are allowed to be billed unchallenged to the public as “sensible gun laws.”


The reality is that these proposals are not only decreasing in popularity throughout the United States, but people are wising up to the fact that magazine capacity limits are widely considered to have little or no “positive effect on public safety.”


Schumer’s placement of a high-ranking gun control advocate in the Senate Judiciary Committee is cause for concern. Unlike the NSSF or the NRA, Everytown and Moms Demand Action are personal crusades funded almost exclusively by New York billionaire Michael Bloomberg. After all, the organizations wouldn’t even exist if the recent failed presidential candidate hadn’t set aside “$50 million of his personal fortune to create a … new advocacy organization.”


Moreover, instead of doing his job as the minority leader, Schumer relied on espionage against one of his own members, executed by someone whose paycheck is signed by an unelected billionaire.


Whether or not Democrats take control of the Senate for the 117th Congress, this incident raises serious questions about what relationships influence Democratic leaders’ legislative priorities, and the effect said relationships will have on all of our constitutional rights.
Click to expand...

In my opinion putting your cock in that would be a crime. Somebody did it at some point

Lol. The last thing the DNC wants is Kamala presidency. As bad as Biden is, she makes him look completely lucid. Wait until she starts yelling at the camera (not Biden yelling. Her chewing out staff yelling) during a address to the public.

Dennis in MA said:
Lol. The last thing the DNC wants is Kamala presidency. As bad as Biden is, she makes him look completely lucid. Wait until she starts yelling at the camera (not Biden yelling. Her chewing out staff yelling) during a address to the public.
Click to expand...

You don't get it. You think there is some massive conspiracy. There isn't. What you see as conspiracy is more often than not incompetence. You give them FAR too much credit. Work in any organization and you'll discover there are very few in ANY organization that have competence to put forth the strategies you propose. Now you want THOUSANDS of people working together and not a single one peeps or cracks. No one can penetrate the organization. It's not reality. It's the opposite of reality.

Leash or not, you are safer putting a microphone in front of Joltin Joe than Kamala. She is a massive liability and 100% picked by Biden, not some Kabuke Cabal. (Wait til he STILL announces a black woman for SC after even his own people told him not to.)

If I had all the power to control everything - would I pick EITHER of those people to run the show on the public side??? Really???? Or would I have picked someone who was mild mannered and intelligent to be the front man/woman/genderneutralhuman? The morons in the mirror picked Joe. Joe picked Kamala. Trump stepped on his wee-wee 83 too many times leading up to the election. And here we are. Nothing more.

There is no master plan to take over the elections. I'm not sure what you guys are going to do come November 9. I'm sure it'll be, "Oh yeah - well the DNC actually PLANTED all those Republicans who took Democrap seats. That's how it works."

There - I said it here first. We are going to wipe the floor on Election Day and there will be people on this board claiming THAT is a conspiracy in and of itself. Because it isn't about the truth. It's about the hunt. It's about. . . dare I say it. . . .feelings and emotions. You're GD liberals in disguise! ROFL!!!!

The Democrats and Gun Control