Corruption and Bias in Mueller-Russia investigation

In a key finding of the Mueller report, Ukrainian businessman Konstantin Kilimnik, who worked for Trump campaign chairman Paul Manafort, is tied to Russian intelligence.

But hundreds of pages of government documents — which Mueller possessed since 2018 — describe Kilimnik as a “sensitive” intelligence source for the U.S. State Department who informed on Ukrainian and Russian matters.

Why special counsel Robert Mueller’s team omitted that part of the Kilimnik narrative from their report and related court filings is not known. But the revelation of it comes as the accuracy of Mueller’s Russia conclusions face increased scrutiny.

The incomplete portrayal of Kilimnik is so important to Mueller’s overall narrative that it is raised in the opening of his report. “The FBI assesses” Kilimnik “to have ties to Russian intelligence,” Mueller’s team wrote on page 6, putting a sinister light on every contact Kilimnik had with Manafort, the former Trump campaign chairman.

What it doesn’t state is that Kilimnik was a “sensitive” intelligence source for State going back to at least 2013 while he was still working for Manafort, according to FBI and State Department memos I reviewed.

Kilimnik was not just any run-of-the-mill source, either.

He interacted with the chief political officer at the U.S. embassy in Kiev, sometimes meeting several times a week to provide information on the Ukraine government. He relayed messages back to Ukraine’s leaders and delivered written reports to U.S. officials via emails that stretched on for thousands of words, the memos show.

The FBI knew all of this, well before the Mueller investigation concluded.
Click to expand...

Now that the Muller testimony in the house has been delayed I bet it will never happen.......

Until individual bureaucrats are personally held accountable for restitution and criminal charges for those that they commit crimes against under the color of the law this shit will continue.

How does the DoJ/FBI expect anyone to have any faith/respect in them or the rule of law so long as they refuse to come clean with the public.

I believe I saw an article today as well that indicates that Flynn's new lawyers are demanding evidence be entered that demonstrates collusion between the FBI agents and the Clinton camp.....aka Conspiracy

jpk said:
This extends to prosecuting Comey and the rest of the cabal in the same manner that a regular run of the mill citizen would be prosecuted
Click to expand...

i do not know if comey had committed felonies, or just let his personal politics and ego get in the way of his job. I suspect the former, but a TRIAL IS NEEDED to tell! One way or the other....prosecute him, let a jury hear his defense, and then convict/acquit as the facts dictate. I for the life of me do not understand why the DOJ has not indicted comey, and his band of merry tricksters, yet! 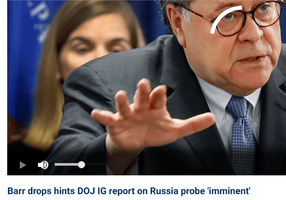 Until people start getting 3AM no knock raids on their homes and arrested and brought into custody, it's all just fantasy. Nothing matters if the perpetrators are not brought to justice.

VetteGirlMA said:
Until people start getting 3AM no knock raids on their homes and arrested and brought into custody, it's all just fantasy. Nothing matters if the perpetrators are not brought to justice.
Click to expand...

jeez, its been THREE FRICKIN' YEARS.
This is like Jimmy Hoffa's murder....its been so long there will be no evidence left if they actually went to look for it.

My guess is that this is as difficult as arresting and convicting bad cops, since we are talking about intelligence and FBI agents. "Just doing my job" will be "okay sounds good" because we all know what happens when the police investigate the police. There is never any wrongdoing. Ever.

VetteGirlMA said:
Until people start getting 3AM no knock raids on their homes and arrested and brought into custody, it's all just fantasy. Nothing matters if the perpetrators are not brought to justice.
Click to expand...

And they sure as shit better give them at LEAST the same treatment roger stone got.....

Dont be surprised if you see federal charges filed against Schiff

An emissary for two Arab princes boasted to unnamed officials of a Middle Eastern government about his direct access to Hillary and Bill Clinton while funneling more than $3.5 million in illegal campaign contributions to the 2016 Clinton campaign and Democratic fundraising committees, according to a

After reading this foolishness I hope even more that Trump wins! It would be an even better FU to these A-holes than him winning the first time.
You must log in or register to reply here.
Share:
Twitter Reddit Link

we the people demand Mueller end his investigation
2