I have a cat up for adoption. Her name is Chloe and I adopted her from another NES member in July to save her from the shelter. She is 13, in very good condition, very small at 6.5 pounds. It isn't working here because she is very aggressive and non-friendly towards my own cats. She really needs to be the only cat in the home, and would be great for a senior citizen. She is an indoor-only cat, up to date on her vaccines. I need to get her out of here ASAP because she is starting to get beat up by my cats because of her aggression. If I can't find a home she'll need to go to a shelter. I am in So. NH on the Mass border. 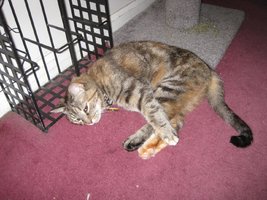 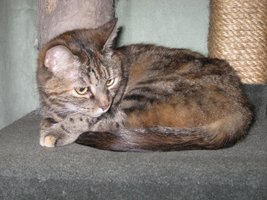 Hope you find a home for her. How is she with people? Unfortunately I can't help you out - since the only cat I have now is an elderly 21 yrs old - blind and semi-deaf , and wouldn't take well to gettting attacked all the time.

She's great with people, and loves the place, she just doesn't seem to like other cats. She doesn't actually attack them, she just swats them if they get too close and continuously growls at them. My three are 13 year old brothers and were pretty mellow with it at first , but its getting old with them and they're starting to get physically aggressive back at her and she won't back down, even though she's 6.5 pounds and my smallest is 14 pounds. It's really too bad, because this would've been a good home for her otherwise and she's going to have a tough time in a shelter at 13.

So how is it going with her? I've had lots of cats over the years - and I've got to say that the swatting and growling is pretty much normal, especially since she's the new cat on the block and your other three have been together forever and probably know they pretty much run the place.

I had a female a few years back who was a lot like this cat - she would swat at the other cats and growl at them and all that - and it all worked it's way out eventually. She really would not put up with an crap from the other cats and they all figured it out sooner or later.

I've got to say that even if you find them beating the living crap out of each other a few times - it's NORMAL. After my mother passed away a few years back - we took in her cat. We had already taken in a cat who turned out to be about 20 years old - and who had serious medical problems. My mother's cat was old and had some serious medical problems of his own. That didn't stop the two of them from really going at it with each other a couple of times. The other two cats we had at the time pretty much lived and let live. The two that fought worked out their shit - I had to yell at them - both of them - to knock it off a few times , but it did settle down.

Let them know who's in charge and be fair about it. Make sure everybody has their own food to eat and place to sleep and don't tolerate any crap from them like litter box blocking - and sooner or later everybody will get the message. Also show affection - to all of them.

We've passed a lot of cats thru our doors - including boarders and short term visitors - and also a few dogs, and I've come to the attitude that it can be managed and just about everybody can get along once they know what the rules are.

Twigg said:
We'll take her if she is still available.
Click to expand...