Well, as the moonbats say, If you teach young kids to kill animals, it will be easier for them to kill humans later. I'd like to report that this family is right on schedule. Jack.

My son shot his ~125lb hog at 150 yards with a little 18” Ruger Gunsite Scout (dead right there, it might have kicked a yard or two). Not nearly as nice and accurate as his AR-15 (sub-MOA left-handed upper from Minuteman) or his AR-10 with Ultra Match Barrel.

Anyway, I have advised no matter how insane the circus is that’s coming for you - turn one of there heads inside out and the rest will re-evaluate there life choice p.d.q.

Devils Paintbrush said:
No one bats an eye when a drunk driver kills multiple people in a car crash...a pathetic double standard.
Click to expand...

Hey hey hey, take it easy on the drunks!!

It’s a funny word, “moderate.” We throw it around habitually, as a positive and aggrandizing description, but we rarely stop to ask the crucial, prerequisite question: “Relative to what?” 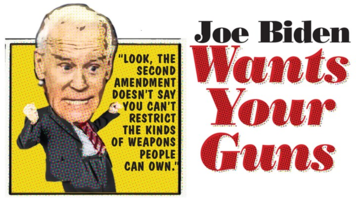 Given the absurdity of Biden’s views, it would be tempting to simply laugh them off. But this, alas, is no laughing matter. Statistically, there is a reasonable chance that Joe Biden will become president, and, should he become president, there is a serious chance that he will immediately set about dismantling the Second Amendment. As his campaign website makes clear, Biden supports every single measure that the gun-control movement is currently trying to sell. He is for a ban on standard capacity magazines; he is for the prohibition of the most commonly owned rifle in America; he is for the extension of background checks to private transfers, including transfers between family members; and, inexplicably, he believes that the expansion of concealed carry is “irrational.”

In addition, Biden hopes to repeal the Protection of Lawful Commerce in Arms Act—a bipartisan and commonsensical law that prevents renegade judges from permitting well-funded activists from suing gun manufacturers out of existence if or when their products are willfully misused by criminals. There is only one reason for a politician to oppose the Protection of Lawful Commerce in Arms Act, and that is that he wishes to drive the firearms industry out of business. Why go to the effort of banning the firearms you dislike when you can ensure by the backdoor that no more can be made?

And that’s just the stuff he has vetted. Off the cuff, Biden is even more extreme than on paper. At a recent rally, he publicly promised that, should he form an administration, he will appoint Beto O’Rourke “to take care of the gun problem with me.” Why? Because, like O’Rourke, Biden intends to confiscate certain firearms. In an interview with CNN’s Anderson Cooper last year, he was asked whether “a Biden administration means they’re going to come for my guns.” Smiling, Biden said that it would. “Bingo!” he exclaimed. “You’re right if you have an assault weapon. The fact of the matter is, they should be illegal, period. Look, the Second Amendment doesn’t say you can’t restrict the kinds of weapons people can own.”

Such a law would undoubtedly be unconstitutional, but, should he get his way, that would not necessarily matter. As was made abundantly clear during his 35 years in the U.S. Senate—and subsequently during his eight-year stint as vice president—Joe Biden prefers judges who do not accept that the “right of the people to keep and bear arms” means “the right of the people to keep and bear arms.” On the campaign trail, Biden claims vaguely that he supports the Second Amendment. In practice, however, he has proven to be precisely the sort of “Second Amendment but” politician whose tenure leaves the right less secure than it was beforehand. Biden served as a cheerleader for Justices Elena Kagan and Sonia Sotomayor, both of whom voted to uphold Chicago’s absolute ban on handguns in McDonald v. Chicago, and he has promised to nominate similar judges to the U.S. Supreme Court. Americans who wish to retain their elementary rights should believe him, and act accordingly.

It is one of the great perversities of American politics that the figure who most often rants about “malarkey” is himself its greatest purveyor. Joe Biden wants America’s voters to believe that he is a straight-talkin’, no-nonsense centrist with no time for ideology. But he is no such thing. Politicians who truly “support the Second Amendment” do not praise figures such as Beto O’Rourke, or promise CNN hosts that they intend to ban rifles, or head up gun-control task forces, or oppose legislation that protects gunmakers from lawfare, or fantasize about weapons that exist only in movies, or cast shotguns as the only protected type of firearm, or fantasize aloud about shooting wildly into the darkness, or praise judges who refuse to accept one of the component parts of the U.S. Bill of Rights.

Joe Biden is no moderate. Biden wants your guns.

Let’s not forget - even with a GOP majority in the House, Senate or both (which is unlikely) we have seen they are useless. They might have hearings (but not get all the documents and let it drop) or have a press conference and make a speech or two.

The Dems seem to be able to always find a judge to stop Trump - yet the GOP can’t manage to stop an EO that changes enacted laws.

If Biden wins, it’s going to be up to you and what you are willing to do; comply or stand.

GM-GUY said:
Let’s not forget - even with a GOP majority in the House, Senate or both (which is unlikely) we have seen they are useless. They might have hearings (but not get all the documents and let it drop) or have a press conference and make a speech or two.

The Dems seem to be able to always find a judge to stop Trump - yet the GOP can’t manage to stop an EO that changes enacted laws.

If Biden wins, it’s going to be up to you and what you are willing to do; comply or stand.
Click to expand...

Complying's easy, we know where that goes. Standing, not so much, in this region probably lying in a pool of your own blood. As the ghosts of Lexington and Concord would tell you, "People listen and people bond and people band together." Not an easy decision for most but, most worthy of thinking about now before the time comes.

“I have the great honor to announce that I’ve picked [Kamala Harris], a fearless fighter for the little guy, and one of the country’s finest public servants, as my running mate,” tweeted Biden.

Harris, like Biden, doesn’t like your constitutional right to keep and bear arms. While running for the very position Joe Biden is poised to secure, Harris confirmed in a debate last September that she would take executive action within her first 100 days in office to ban the “imports and AR-15 assault weapons,” as moderator David Muir had mislabeled these popular semi-automatic rifles.

Harris’ website also declares her intent to implement “universal background checks, and assault weapons ban and the repeal of the NRA’s corporate gun manufacturer immunity shield,” if Congress fails to do so within her first 100 days in office.

Perhaps most troubling of those is Harris’ final point: She intends to repeal the Protection of Lawful Commerce in Arms Act (PLCAA). The PLCAA was enacted to protect the firearms industry from frivolous lawsuits designed to functionally bankrupt firearms manufacturers. It does not protect firearms manufacturers or dealers if they break the law, or from normal product-liability claims. It simply stops them from being held liable if a criminal illegally misuses their products.

Like Biden, she is not hiding her disdain for your rights. While serving as San Francisco’s district attorney, she was joined by other district attorneys in an amicus brief filed in the landmark case, District of Columbia v. Heller (2008)—the case in which the U.S. Supreme Court confirmed that the Second Amendment protects an individual right to keep and bear arms. The amicus brief (or “friend of the court” brief) Harris signed on to was in support of limiting your Second Amendment rights. Thankfully, the U.S. Supreme Court disagreed with her.

This puts Harris in step with Biden and his anti-gun agenda, as well as his constant attacks on the NRA. Just last week, Biden tweeted: “Weapons of war have no place in our communities. When I was a senator, I took on the [National Rifle Association] and secured a 10-year ban on assault weapons – and as president, I’ll ban these weapons again,” referring to the egregious and improperly named “Federal Assault Weapons Ban” that sunset in 2004.

“[Harris’] promotion of anti-gun policies, as perplexing as some of them may be, should cause concern for all law-abiding gun owners,” wrote the NRA Institute for Legislative Action last fall, while Harris was campaigning for the very position Joe Biden is set to take.

Politicians, like Harris, Biden and New York Attorney General Letitita James are stepping up their efforts and attacks on this nation’s oldest civil-rights organization, your NRA. Biden’s selection of Harris as his running mate should come as no surprise given her outright disdain for the Second Amendment and the NRA. Freedom is clearly on the ballot, and your vote matters this fall.
3

Location
Down the rabbit hole, somewhere in Paradise.

556USER said:
I noticed that a lot of people are making jokes about what Bidet says regarding things like banning assault weapons. If this puppet gets elected no one is going to be laughing then. Sure we won't be turning in our guns but you won't be able to take them to the range either once they are made illegal. Keep laughing.
Click to expand...

Some people will get scared and turn them in, like the Australians and New Zealanders did. Others will cache them, along with plenty of ammo. Keeping illegal guns at home in the safe could be risky, especially if your kids know about them and can't control their mouths at school.

Just let off two blasts into the air and you will be fine. Dumbass

Biden Says He Will 'Defeat the NRA' While In Office | ZeroHedge

ZeroHedge - On a long enough timeline, the survival rate for everyone drops to zero

Biden Says He Will 'Defeat the NRA' While In Office | ZeroHedge

ZeroHedge - On a long enough timeline, the survival rate for everyone drops to zero

I still don't give Biden* good odds on being President by St. Patrick's Day.

He may even disappear like Judge Crater,
because some staffer may be told to put him on the bus to the dog track,
and misinterpret the instructions. No telling where he'd end up if the stuffed him on an interstate bus.
They could kick him to the curb in Muncie because he's been annoying
the other passengers.
Share:
Twitter Reddit Share Link