2 boxes of 500 Berry's 230gr round nose hardcast 45ACP. Bought these by accident a while back and have plenty of the ones I normally use. Decided to sell these instead of working up a new load as I have a few thousand of the ones I use now. I opened 1 box just for the picture of the bullet.

Face to face as I don't want to ship these. Meet in or near Woburn.

Also have 1000 CCI Large Pistol primers for $100 if you want to buy the bullets and the primers. No pictures but they are the CCI #300's.

All MA laws followed, must have LTC

Forgot these were still posted so bumping it one more time before I work up a load for them and keep them. Dropped them to $120 for for the thousand bullets. 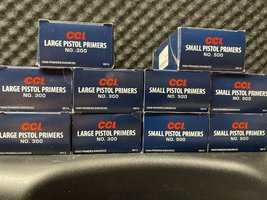